According to a new study published this week in the journal Nature, researchers conducting the first-ever genomic study of indigenous Australians have found evidence of a single “out of Africa” migration for modern humans and confirmed a long-standing claim that Australia’s Aboriginal civilization is the oldest on the planet, dating back some 50,000 years. According to the University of Cambridge, the newly published paper is the first extensive DNA study of Aboriginal Australians. Working in close collaboration with indigenous Australian elders and leaders, an international team of researchers obtained permission to extract DNA from the saliva of 83 Aboriginal Australians and 25 Papuans from New Guinea and sequence their complete genetic information.

While some scholars have theorized that indigenous Australians descended from a separate, earlier migration than that of Eurasian people, the study’s authors report that most non-Africans stem from a single ancestral group of migrants who left Africa approximately 72,000 years ago and eventually spread across the other continents. While European and Asian ancestral groups became distinct in the genetic record around 42,000 years ago, the researchers say that occurred even earlier—approximately 58,000 years ago—in the case of indigenous Papuan and Australian ancestral groups as they ventured eastward.

“Our results suggest that, rather than having left in a separate wave, most of the genomes of Papuans and Aboriginal Australians can be traced back to a single ‘Out of Africa’ event which led to modern worldwide populations,” said Manjinder Sandhu, a senior author from the Sanger Institute and the University of Cambridge, in a statement released by the university. “There may have been other migrations, but the evidence so far points to one exit event.” Around 50,000 years ago, the wave of migration reached Sahul, a prehistoric supercontinent composed of present-day Australia, Tasmania, and New Guinea before their separation by rising sea levels 10,000 years ago. At that time, according to the study’s authors, Aboriginal Australians became genetically isolated, making it the world’s oldest civilization. 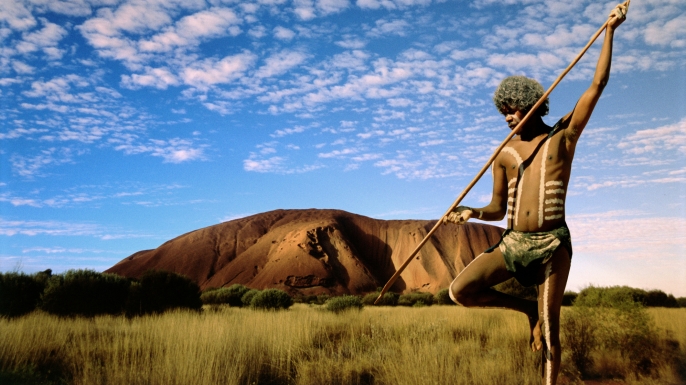 The study also found that Aboriginal Australians and Papuans diverged from each other about 37,000 years ago. However, the reason is unclear because the water separation between New Guinea and Australia had yet to be completed. The researchers theorize the break could have been attributed to early flooding of the Carpentaria Basin that left Australia connected to New Guinea by only a narrow, impassable strip of land. By 31,000 years ago, Aboriginal Australian communities became genetically isolated and started to diverge greatly from one another, likely due to inhospitable desert development in the continent’s interior.

“The genetic diversity among Aboriginal Australians is amazing,” said Anna-Sapfo Malaspinas, one of the lead authors and an assistant professor at the Universities of Copenhagen and Bern. “Because the continent has been populated for such a long time, we find that groups from southwestern Australia are genetically more different from northeastern Australia, then, for example, Native Americans are from Siberians.”

Scholars have long been flummoxed as to why the language spoken by 90 percent of Australia’s Aborigines is relatively young—approximately 4,000 years old according to language experts—if their ancestors had occupied the continent so much earlier. One possible answer has been that a second migration into Australia by people speaking this language occurred around 4,000 years ago. However, the authors of the new study say a previously unidentified internal dispersal of Aborigines that swept from the northeast across Australia around that time led to the linguistic and cultural linking of the continent’s indigenous people. Although they had a sweeping impact on ancient Australian culture, these “ghost-like” migrants mysteriously disappeared from the genetic record.

“It’s a bizarre scenario,” said evolutionary geneticist Eske Willerslev, a lead author of the study and a professor at the Center for GeoGenetics at the University of Copenhagen. “A few immigrants appear in different villages and communities around Australia. They change the way people speak and think; then, they disappear like ghosts. And people carry on living in isolation the same way they always have. This may have happened for religious or cultural reasons that we can only speculate about. But in genetic terms, we have never seen anything like it before.”

One other notable finding from the DNA study is evidence of an “uncharacterized” hominin group that interbred with modern humans as they migrated through southeast Asia on their way to Australia. According to the study, around four percent of the Aboriginal Australian genome comes from this unknown human relative. “We don’t know who these people were, but they were a distant relative of Denisovans (an extinct human species from Siberia), and the Papuan/Australian ancestors probably encountered them close to Sahul,” Willerslev said.