The world needs no introduction regarding the rivalry between iOS and Android smartphones. While the applications and facilities provided by both Android and iOS operating systems are a lot different from each other, but the world’s phone customer base gets hugely affected with each new launch from these giants. While iOS devices are known for their high-end modern smartphones, the Android operating system made it possible for people to access advanced technologies at a range of affordable prices. 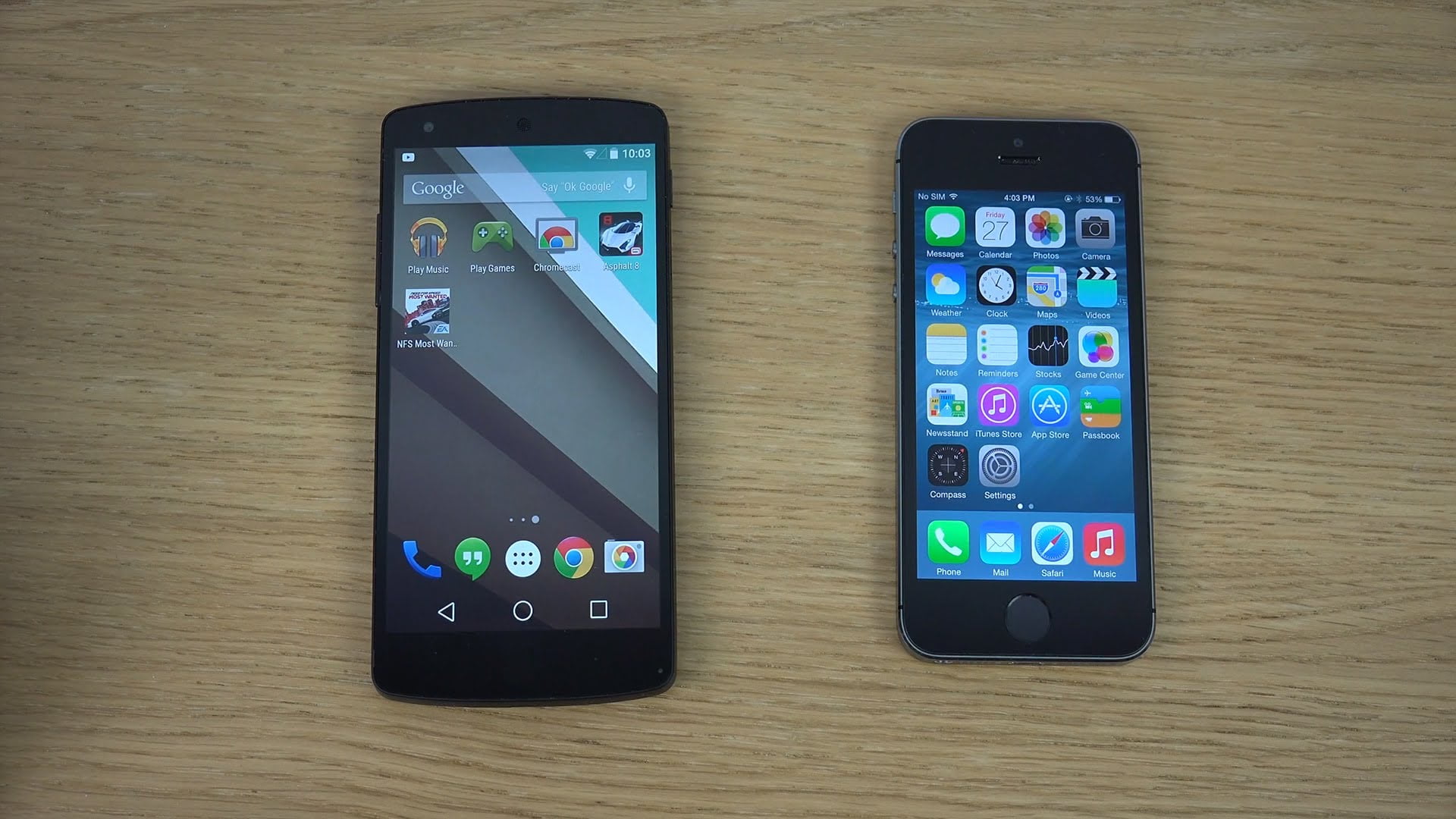 Every time a new device from either of the manufacturers is introduced in the market, the whole world eagerly makes comparisons between them. This trend is being followed for the last few years, and it does not seem to end anytime soon. With the release of Android L and iOS 8 in the coming fall, this rivalry is expected to get a new boost, and the famous war between these two is surely going to bloom. Looking at this persisting rivalry, how can we stop ourselves from making comparisons between Android L and iOS 8? Without wasting any more time, let us take a closer look at Android L (running on Nexus 5) and iOS 8 (running on iPhone 5S).

Taking a look at the lock screen of Android L, it has gone through some commendable changes. Earlier, we had to pull down the screen from the top to read the notifications, but now we can see the notifications right in the middle of the screen. This feature, somehow, seems to have been adopted from iOS. By double-tapping a notification in Android L, that particular app will get launched, and to dismiss it, all you need to do is swipe it to either of the two sides. While a swipe on iOS 8 can be used to reply to an email or mark it as READ. These features are well-justified in both Android L and iOS 8.

In iOS, the notification light will be on for long enough so that the user can read the message, while in Android L, the RGB notification light will go off. Also, there is a shortcut to the Phone application present on the lock screen of Android L, something that is not there on iOS 8. But the camera application is present on the lock screens of both Android L and iOS 8.

The keyboard in Android L has been slightly modified, but altogether, it is no different from a regular keyboard that we have earlier used on Android devices. All the features, such as auto-correct, emoticons, and word prediction, are very much a part of Android L. But Apple has efficiently included some very remarkable word- predictions in iOS 8. The context and purpose of the ongoing conversation are understood by an algorithm, which then makes some brilliant predictions.

Android L’s Phone app has gone through some commendable changes. All the starred contacts are now placed conveniently at the bottom edge of the screen, giving them quick access. Meanwhile, the Search and Last Dialled contacts are at the top. On the other hand, no changes have been made to the Phone app in iOS 8, which is understandable. Still, Apple leads here due to features, such as blocking texts and calls from desired contacts.

In Android L, the contact list is compact compared to before, with little spaces between each contact and a small profile picture. While in iOS 8, there is no space for a profile picture, probably because the developers know that most of them will remain blank.

Android L has done a commendable job in listing the notifications according to their priority. The most important ones are placed at the top and so on. For instance, all emails are now placed at the top while updates are at the bottom. However, Apple has taken a more organized path, and by pulling the notification panel down, weather reports and the user’s daily schedules will also get displayed. Notifications are now placed separately, and the order in which these are listed can be changed by going into the device’s Settings.

Like before, a Quick Controls menu is present in the pull-down panel of Android L. This new design is definitely a plus-point, along with the brightness slider and an added toggle for adjusting the screen’s orientation. Similarly, the Quick Control menu in iOS 8 is also loaded with commendable features. However, one must be careful while scrolling down any webpage as this might pull the panel downwards.

In Android L, the Camera app from Google has been used as usual. You can easily access this app from the Play Store. This app needs no introduction, and it is known for its easy-to-use interface. The built-in camera modes in Android L are supposed to satisfy every casual user. On the other hand, the iOS 8 camera certainly has a few good features to boast about. Shooting time-lapse videos, controlling focus, self-timer, and independent exposure are some of the features in iOS 8.

In Android L, the Photos app enables us to view the photos. There are two separate tabs for managing photos, Highlights, and one containing all pictures. This app has automatic backup and arranges your photos in different folders, depending on their date. There are various editing tools, and you do not have to be a PRO to use them. Similarly, iOS 8 also arranges your pictures by date and time. Backup is also available to ensure that you never lose any of them. The editing features in iOS 8 are certainly fewer than Android L, but the simplicity and ease of use are definitely something to appreciate.

These are just some of the features that we have drawn a comparison between. However, both Android L and iOS 8 are destined to undergo some changes before their launch date. It is entirely up to the users to decide which smartphone to invest in. Looking at the current trends, Android and Apple are again going to be at loggerheads.

For more articles similar to this, you can visit Android Valley.

As an author, I am constantly exploring the world of Android and can also provide you with lots of information about this amazing operating system. If you are looking for more articles on Android, you can visit my website.